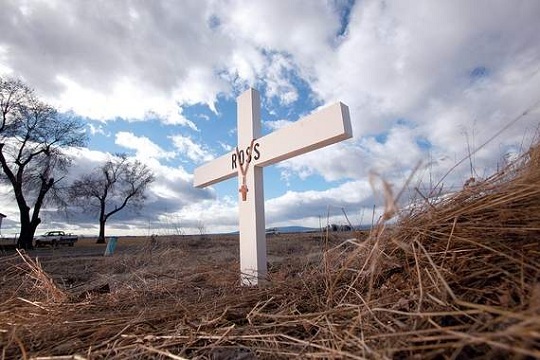 Prosecutors expect it will take a grand jury until the end of the month to determine whether a Madras woman with a long record of driving offenses will face criminal charges for a deadly crash she allegedly caused last fall.

The Jefferson County District Attorney’s Office is remaining quiet on what charges are being discussed against 28-year-old Andrea Orozco for the Nov. 21 accident. But Orozco’s attorney, Angela Lee, said she believes the jury may be considering charges not related to the death of Metolius resident Leonard Franklin Ross.

Ultimately, though, “It’s basically up to the grand jury” to decide whether to bring criminal charges in Ross’ death or “in any injuries to the passengers or anything of that nature,” said Lee.

“We hope the grand jury comes back with something,” said Steele, a 48-year-old Metolius resident. “We want to move on. We want the case to move forward. We don’t want this woman to spend rest of life in jail, we really don’t, but she needs to be held accountable. We just want her to understand that what she did was wrong and we don’t want her to ever be behind the wheel of a car again.”

According to the Oregon Judicial Information Network, Orozco has been cited by police on eight occasions over the course of four years in Jefferson, Crook and Clackamas counties for offenses including speeding, failing to drive within her lane and failure to use a seat belt.

She has been cited for driving with a suspended license four times.

Her most recent conviction comes from driving with a suspended license and failing to carry proof of insurance on Oct. 2, 2010, just under two months before she allegedly caused the fatal crash.

Despite Orozco’s record, Lee said she does not believe there is sufficient evidence to support a criminal charge in Leonard Ross’ death. Lee did say there is a chance the jury could be considering assault charges as a result of injuries to the passengers in Orozco’s vehicle or injuries to Linda Ross. However, she did not share her reasons for believing Orozco might escape charges in Ross’ death.

“The grand jury looks at the entire incident,” Lee said. “I honestly don’t know what to expect.”

“The newspaper and the television stations are available in all three counties,” Lee said, referring to Jefferson, Crook and Deschutes counties. “I don’t think people would be purposefully biased against my client, people just get caught up in emotions.”

According to Oregon State Police, the crash occurred after Orozco ran a stop sign while driving a Ford Expedition with eight passengers, six of whom were children ranging in age from 2 to 14. Upon entering the intersection of Southwest Culver Highway and Southwest Highland Lane, Orozco’s vehicle collided with a Toyota four-door driven by Linda Ross, 61, of Metolius, with Leonard Ross, 71, in the passenger seat.

Leonard Ross died of his injuries at St. Charles Redmond later that night.

Police said three of the passengers were thrown from Orozco’s vehicle, and everyone in the crash was hospitalized.

Ross was the only one to die of his injuries.

Police said they do not believe Orozco was intoxicated at the time of the crash.

“They are still in session,” Leriche said. “They are still taking information. They don’t have a deadline, but I’m guessing we are looking at two weeks.”

Leriche said he is in the process of calling individuals involved in the investigation to testify. He would not discuss the charges under consideration, but did confirm that the involvement of a grand jury means that criminal charges are being contemplated. If the jury finds there is sufficient evidence to charge Orozco with a crime, the case will move to a trial court.

Leriche originally said he didn’t believe the crash would result in criminal charges, but after continued investigation into the matter he elected to call the grand jury.

Steele said the past few months have been “a struggle” as her family deals with the loss of her father, a man she said was loved by the community.

“He had a big heart,” Steele said. “On the surface he seemed kind of like a grumpy old man, but the truth was he would do anything for anybody. Everyone in the area knew my dad and everyone loved him.”

Steele said her stepmother, Linda Ross, still has a cast on her left leg as she waits for the broken bones in her ankle to heal. Estimates for her medical care are nearing $100,000.

“She has no health insurance,” Steele said. “This has been a very difficult time for us.”

Donations for the Ross family are being accepted at Mid Oregon Credit Union and U.S. Bank in Madras.