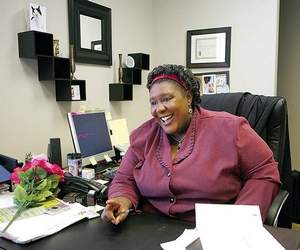 Attorney and part-time city of Bend Municipal Court Judge Angie Lee flashes her trademark smile while talking with a client at her office in downtown Bend on Thursday morning.

Angela Lee
Age: 39
Education: Undergraduate degree in political science from the University of California, Davis. Law Degree from the University of Oregon.
Work experience:  Substitute teacher, more than eight years as a public defender in Bend. Now working in private practice and serving part time as a Bend municipal court judge.
Family: Single but lives with her dog, Tippy.

Angie Lee has never met someone she didn’t consider a potential friend.

Lee is known within the legal community as a compassionate lawyer who goes above and beyond. She worked for years as a public defender and was hired last year to serve as a part-time municipal court judge. She does that in addition to working as a lawyer for a private law firm.

“Angie fits into any situation and she meets no strangers,” said her uncle Joe Lee, Alabama State University president. “She is, of course, African-American, but she is at home in any community.”

“I marvel at her ability to fit in with any culture.”

Angie Lee credits her mom and dad with teaching her to be comfortable in her own skin.

“My parents taught me that color doesn’t matter, you are who you are and you’re going to be judged by your actions,” Lee said. “And that’s the way it’s been. People have judged me on my actions.”

Her closest friends and family say that “action” is a perfect word to describe Lee.

Since she was a little kid, they say, Lee has been heavily involved in civic organizations and volunteer work. She has a relentless dedication to helping others.

“Just when you think ‘I can’t believe how much I’m doing right now,’ Angie’s doing twice as much,” said Deschutes County Deputy District Attorney Mary Anderson, who attended law school with Lee at the University of Oregon.

It helps that she is single and has no kids, but Lee treats her friends like family, and her family says she treats them like gold.

Lee said she came into this world because of an accident her mom had while working at an aviation company in Los Angeles.

“She fell and broke her leg and hurt her back really bad, and she was stuck at home with nothing to do and that’s how I got here,” she said.

During her mother’s pregnancy a family friend showed up with a desert tortoise named Samantha that remains a family pet to this day, Lee said.

“Sam has gone into every single classroom I’ve ever been in,” she said.

Lee recently watched a documentary on desert tortoises, she said, and started to wonder if Sam had a secret. A specialist recently confirmed her suspicions that Sam is, in fact, a male.

“So for 40 years we have thought of this turtle as a girl and we still refer to her as ‘she,’” she said with a laugh.

Lee grew up in the Southern California town of Harbor City, a predominantly white community.

Her parents say she was in constant motion.

“She was a tomboy and she loved to climb trees and play baseball, so we finally decided to enroll her in the Barbizon modeling school and that took some of the boy out of her,” said her 73-year-old father, Walter Lee.

Her compassion for others was evident at an early age, said lifelong friend Carlos Acedo, of Long Beach, Calif.

Acedo’s family immigrated to the U.S. and moved to Harbor City when he was 9 years old, he said. His parents enrolled him in the fourth grade at the same elementary school where Lee was a student.

Lee recalls their teacher asking if anyone in the class spoke Spanish when Acedo arrived.

Her hand shot up in the air.

“I think I knew three words but I had this book that my godparents who are Mexican gave me and I was trying to communicate with him,” she said. “My Spanish did not get better but his English did.”

The two ended up attending a medical magnet high school in Los Angeles where they both aspired to be doctors.

Acedo remembers Lee tutoring other students, volunteering in the community and becoming very active in the Keywanettes, a youth group sponsored by the Kiwanis club.

To no one’s surprise, Lee ended up governor of Keywanettes for the region covering California, Nevada and Hawaii.

“So my senior year I am governor of Keywanettes, I am in this magnet school and then I was approached by Junior Miss and they want me to represent Harbor City in this pageant in Santa Rosa, and I’m thinking, ‘What?’” Lee said.

She wrote a one-person play for the talent portion but ended up losing out when the general knowledge question she was asked had to do with politics.

“I had no idea,” she said with a roll of her eyes.

Lee went to college at the University of California, Davis campus where she was determined to study medicine.

Until, that is, she got into organic chemistry.

She tried to make it through the class, a requirement for pre-med students, twice. It didn’t go well.

“So I talked to my dad and he said “Have you thought about going to law school? You like to argue,’” she said.

When Lee was 20 her family experienced a loss that they will never get over.

Her older brother, Adrian, was killed in a car accident along with his wife and mother-in-law.

Lee still has a large framed photo of her brother in her office.

“Now she is always trying to do more for us if she can,” said Lee’s 80-year-old mother, Billie Jo Lee. “She surprises us and sends us on trips and cruises and I tell her ‘Angie, you can’t make up for Adrian.’”

When she returned to college, she changed her course of study and spent time outside of class working at a local soup kitchen run by the Jewish Student Union. She started hanging out with other students involved with the union and ended up running for office.

“I ran for vice president and I beat somebody out who was Jewish,” she exclaimed. “I was the first and only black and Catholic vice president of the Jewish Student Union.”

I think that was possible for me to do that because my parents have always taught me we are all just people,” she said. “And I figured if I could get people to elect me vice president of the Jewish Student Union, I can do anything.”

She went on to attend law school, where she participated in student government, sat on the dean’s advisory board and got involved with a group that brought speakers to the school for the benefit of the general community.

“She was always involved,” Anderson said.

But law school was tough and the academic competition was fierce.

“I think probably the third day of law school I realized that I was not going to graduate first in my class so I made a plan to distinguish myself,” she said.

She did internships every summer, earning school credit for the positions that helped her graduate early along with one other student.

“So I graduated in a class of two and I was ahead of him, so … I graduated first in my class,” she said smiling.

After graduation in 1994, Lee spent some time substitute teaching while she waited to find out that she had passed the bar exam. Then she got a temporary job working as a clerk on a triple homicide case in Eugene and decided to apply for a public defender position in Bend.

Out on her own

She made a reputation for herself as someone who wasn’t afraid to talk straight with her clients.

So one day her boss Tom Crabtree assigned her a client that he thought needed special attention.

“Tom had a juvenile client who had an incident on a bus and he called a black kid the ‘N’ word, and Tom decided this child needed a lesson,” she said. “His mom brought him in and they came to my office and I said ‘Hi, I’m Angela Lee, I’m going to be your attorney’ and I thought we were going to have to give him CPR.”

Lee had pulled the police report, which was replete with the racial slur and made the boy read it out loud to her.

“I really don’t think he’ll do it again,” she said smiling.

During her time as a public defender, Lee continued volunteering during her free time.

She spent six years on the board of directors for Grandma’s House, a local nonprofit that provides housing for pregnant teen girls, said Executive Director Woody Mederos.

“She got out there and supported the girls in every way,” Mederos said. “Every girl that had a legal question, she was there for them. She’d be here at 9 o’clock at night, she’d sit down and put up her stocking feet and talk about what their rights were.”

Mederos said she became close friends with Lee and now invites her over for Thanksgiving every year.

“But every year she is somewhere serving turkey to someone who doesn’t have someplace to go,” Mederos said.

Just over a year and a half ago Lee took a job with Bend law firm Albertazzi, where she continues to represent criminal defendants.

“She goes the extra mile,” Lotito said. “There is a 24-hour advice line through her office and that number is her number. It goes directly to her. So anyone can call her up and get free advice and she’ll tell them if they need a lawyer or what they need to do.”

In February 2006, Lee was hired by the city of Bend to serve as a part-time municipal court judge.

When she got the news, she called her parents.

When Lee was sworn in as judge it seemed everyone she knew turned out, Anderson said.

“It was big deal, you had law enforcement there, private attorneys, her friends, court staff and I brought one of my kids,” Anderson said. “I think it just really speaks to how many people Angie touches in her day-to-day life. It was packed.”

Now that Lee is in private practice, she is working harder than ever, but she always seems to make time for her friends and family.

On Thursday, Lee left to pick up her parents, their cockatiels and Sam, who are all moving to Bend to be closer to her.

She spent the day Friday driving them here from Southern California.

“I think there are very few people in life that you come across that you can depend on no matter what,” said paralegal Holly Davis, who works in Lee’s office. “Any time of the day, any day of the week, she is that one person.”

Another of Lee’s many friends, Kathleen Maunder, of Portland, said she knows exactly what Davis means.

“When you’re her friend she is loyal to you to a fault,” Maunder said.

Maunder, 69, said she was recently diagnosed with breast cancer and underwent surgery at a Portland hospital in June.

“And just before I go into surgery I see someone walk by my bed and I think ‘That looks like Angie,’” Maunder said. “She had driven over from Bend and had no idea where the hospital was and she stayed for the whole day. Nobody knew she was coming. I was dumbfounded.”

And she’s just as dedicated to her clients who invite her to their baby showers and out for lunch or coffee.

Cindy Powers can be reached at 617-7812 or cpowers@bendbulletin.com