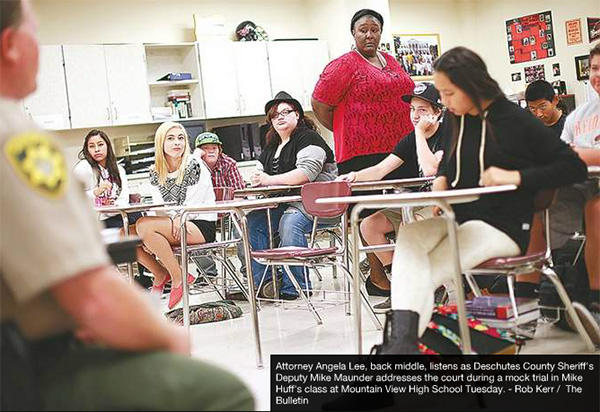 Constitution in the classroom

Kids get a chance to try history teacher, learn about 14th Amendment

When Mountain View High School teacher Mike Huff arrived at his classroom Tuesday morning, he didn’t realize that in just a few short hours, his own students would accuse, try and convict him of being a menace to society.

“It was a surprise — I didn’t know I was going to be part of the trial until third period today,” Huff said. “But it helps students get that real-world flavor in the classroom. It gives them an authentic experience.”

Tuesday was Constitution Day, a national day commemorating the signing of the U.S. Constitution.

To commemorate the event, several local lawyers will visit Central Oregon high school classrooms this week to teach students about the 14th Amendment through a study of the Gideon v. Wainwright case.

The 1963 case was the catalyst for a landmark ruling that determined that even if defendants in criminal trials could not afford an attorney, they had to be provided with representation.

Local attorney and municipal court judge Angela Lee visited Mike Huff’s Mountain View classroom Thursday and conducted the mock trial. The simulation was based on Gideon v. Wainwright, with Huff playing the role of the defendant.

Accused of stealing loaves of bread from Whole Foods, Huff was unable to afford an attorney in the mock simulation and was forced to defend himself.

Lee played the prosecuting attorney, and real-life Deschutes County Sheriff’s Deputy Mike Maunder played the role of arresting officer and witness, lending an air of reality to the proceedings.

Noah Klein, a student sitting in the second row, was selected to oversee the trial as judge.

Lee paced between classroom desks, questioning Maunder about the night of the alleged theft.

According to Maunder, he saw Huff a few blocks away from the store after the theft. When the deputy stopped and questioned him, he claimed the defendant confessed to the crime.

After Lee’s questioning, Huff was allowed to question the deputy.

But Huff didn’t get too far before Lee objected to his line of questioning, claiming he was making a statement rather than asking the witness a question.

The objection was just one of many that Lee made while Huff attempted to question the witness.

“It wasn’t really fair,” Jacob Rey, 14, said. “If you don’t have anyone to represent you, then you don’t know the rules of the court, and you can’t really defend yourself.”

When the 30-plus jury members were asked if they thought their teacher was guilty, every student but two raised their hands. Some smiled quietly, enjoying their moment of rebellion, even if it wasn’t exactly real.

Lee later explained to students the background of Gideon v. Wainwright, in which a Florida man was sent to jail for five years after being convicted of a burglary in 1961. Unable to afford an attorney, he was forced to defend himself and lost the case.

After an appeal, the Supreme Court ruled that under the 14th Amendment, courts are required to provide counsel in criminal cases to defendants unable to afford their own representation.

When the bell rang, Huff was released from his duties as accused bread thief and could once again resume his role as law-abiding history teacher.

“It was an awesome experience having a real lawyer in the classroom,” McKenzie Costello, 14, said. “I liked seeing what they do every day at their jobs here in class. We’re usually learning about American history, but we don’t usually get to see this side of it.”